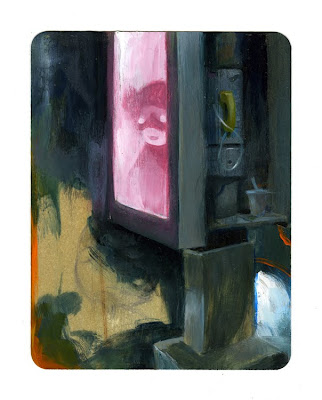 Medium: Acrylic
This captivating painting is by artist Robert MacKenzie. Robert grew up in San Mateo, California and graduated from San Jose State University with a degree in Illustration and Animation where he was also on the faculty at the School of Art and Design. As a Concept, Visual Development and Color Key Artist Robert has worked at such film studios as Lucasfilm, PDI/Dreamworks and, for many years now, Blue Sky Studios contributing his visual ideas and color sense to many a feature film, from Harry Potter and the Sorcerer's Stone to Horton Hear's a Who!, to name only a few. Outside of working on films, Robert is a children's book illustrator, Jack and the Beanstalk and Fly, Cher Ami, Fly, and gallery artist showing his artwork nationwide as well as abroad. Robert's artwork has appeared in Communication Arts, Spectrum, the Society of Illustrator Annuals, and as well as contributed to many other group projects such as the Totoro Forest Project, the Out of Picture anthologies and Sketchtravel.

To see more of Robert's monster series visit his blog where you can also peak into his inspiring sketchbook.
Posted by Brownstones To Red Dirt Postcard Art Benefit at 7:10 AM