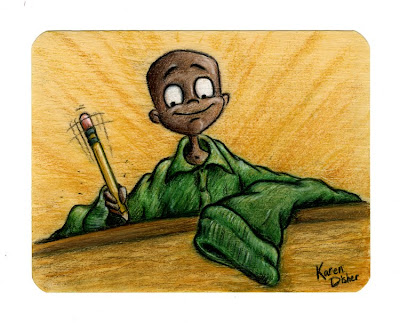 Capturing Malik's expressive energy, this spirited illustration is by artist Karen Disher.  As a child in Alabama, Karen, who studied traditional 2D animation at New York University’s Tisch School of the Arts, never would have imagined that her love of drawing gross and obscene cartoons would one day help her land her dream job as a layout artist on MTV’s Beavis and Butt-Head.  While at MTV, Karen became part of the original development team for the series Daria, designing the main characters and creating the overall look of the show.   And, as Supervising Director for four seasons, she directed many episodes as well as both Daria movies.  A story artist at Blue Sky since 2002, Karen is currently Head of Story on the upcoming Blue Sky feature Rio, and is also developing an original short film with the studio.
Posted by Brownstones To Red Dirt Postcard Art Benefit at 10:56 AM