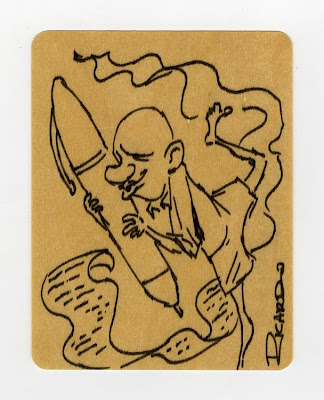 Ricardo Curtis may just be the busiest man in animation. In addition to being the founder and president of House of Cool, he has over ten animated feature films to his credit, such as Monsters Inc. and The Incredibles (Pixar Animation Studios), The Iron Giant (Warner Bros. Feature Animation) and Horton Hears a Who! (Blue Sky Studios) as animator, supervising animator, story artist and head of story. He has also taught Animation at Sheridan College and has served as guest speaker at numerous schools and venues.

Ricardo's postcard isn't his only contribution to BROWNSTONES TO RED DIRT. As president of House of Cool, Ricardo and business partner Wesley Lui were essential in the making of the film, offering both creative and financial support through every stage of the documentary.

To learn more of about Ricardo check out House Of Cool's website and blog.
Posted by Brownstones To Red Dirt Postcard Art Benefit at 2:00 PM