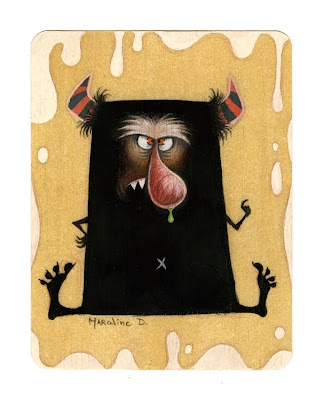 This humorous painting is by artist Marceline Tanguay. Growing up on the French island of Montreal, Marceline studied violin and ballet for many years before finding her passion in the visual arts. At Sheridan College she graduated with a Bachelor's degree in Animation and made the short film Taste of Glory, which was screened at the Ottawa Animation Festival in 2007. Beginning her professional career Marceline worked as a character design intern on the soon to be released Toy Story 3 at Pixar Animation Studios, before she later moved to New York City to join the art department at Blue Sky Studios on their upcoming film, Rio. Still at Blue Sky, Marceline is currently designing for their next feature films and shorts.

To see more of Marceline's illustrations and paintings please visit her blog.
Posted by Brownstones To Red Dirt Postcard Art Benefit at 10:41 AM