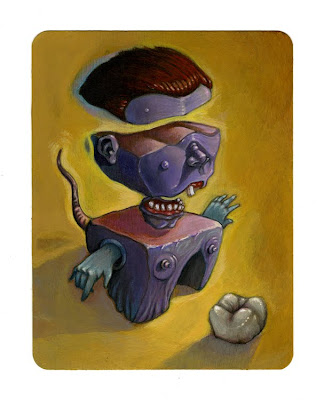 Enigmatic and surreal, this submission titled The Tooth Collector comes from artist and musician Harold Hasselback. Originally from Tampa, Florida, Harold attended Ringling School of Art and Design. He then went on to pursue music with his band Hankshaw, and from 1996-2004 the band recorded and released several records and toured the United States. An appreciative critic described a recent album as "... an upbeat amalgam of pop anthemics, electronic textures, Beatle-esque harmonies and warm liquid disco.” In 2005 Harold relocated to Atlanta, Georgia where he rediscovered his passion for art; and in 2007 has since returned home to Tampa where he is currently working on another release with Hankshaw and enjoying the process of drawing and painting.

To see more of Harold's art please check out his blog.
Posted by Brownstones To Red Dirt Postcard Art Benefit at 1:52 PM