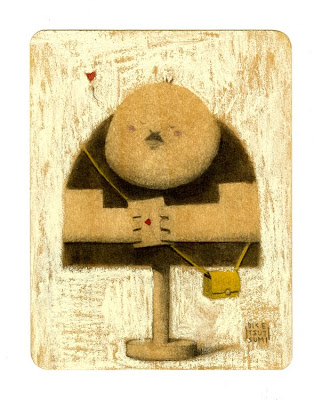 This sweet painting titled "想いをこめて” by masterful artist Daisuke Tsutsumi, illustrates the charming imagery of a letter to someone dearly loved. Daisuke, or "Dice" as he is otherwise known, is not only one of the most generous people we know he is also one of the most gifted artists and inspired illustrators. Whether paintings, illustrations or sketches, the subtle light and composition within Dice's art evokes moods that are transportive. Much can be written about Dice and his list of accomplishments are extensive.. Born and raised in Tokyo, he attended the School of Visual Art in New York. Upon graduating he was a staff illustrator for Lucas Learning Ltd., then a Visual Development and Color Key Artist for 7 years at Blue Sky Studios where his sense of color and light influenced the films Ice Age, Robots and Horton Hears A Who!. Now for the past few years at Pixar Animation Studios, Dice is Art Director on Toy Story 3 where he is currently finishing up some last minute artistic details. Actively pursuing his illustration and painting career outside of animation, Dice's art has been featured in numerous gallery exhibitions worldwide, he's published in Spectrum anthologies, his graphic novelas Noche Y Dia and The Dream of Kyosuke are included in both volumes of the critically acclaimed Out of Picture anthology, and he has recently illustrated and published his first children's book. Immensely talented as a painter Dice is just as talented at getting people together and unifying them under a common cause. He is the one of the main organizers of the hugely successful Totoro Forest Project and the equally famous and ongoing Sketchtravel Project, and has been a great inspiration in the blossoming of our own Postcard Art Benefit.