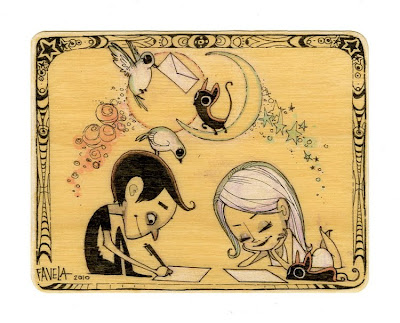 This charming postcard is by artist and filmmaker Eric Favela. Raised in Tucson, Arizona Eric has been making artwork since he was able to grip a crayon. Although spanked as a child for drawing on the walls, he continued to pursue the dream of making art for a living. Graduating from CalArts with a Bachelor's in Character Animation, Eric moved to New York to story board for Blue Sky Studios on Horton Hears A Who! and Ice Age 3 and left his mark creating the beloved character Katie the Yak. Currently residing in southern California story boarding for Blue Sky on Rio while working in development for 20th Century Fox, Eric continues to utilize his ever-growing bucket of crayons for illustrations, caricatures and screenwriting which can be seen in his award winning short film Disconnected and the hilarious Two Minute Itch, both of which showcase his inventive wit and talent.