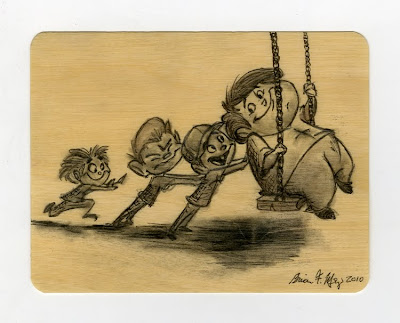 This is humorous illustration is by character animator Brian Menz. As a boy, Brian spent much of his childhood dreaming of a career in 2D animation, making flip books and collaborating with his twin brother using his parent's video camera and drawings of stick figures to create short animated films. Graduating from Edinboro University of Pennsylvania with a degree in Applied Media Arts, Brian interned at Animatus Studios and focused on traditional hand drawn animation before breaking into the world of 3D animation through the television series The Adventures of Jimmy Neutron. From there Brian delved into stop motion on the production of Coraline at Liaka but has since migrated back to 3D animation working for Disney on Bolt, and Blue Sky Studios on Ice Age 3 where he is currently at work on the upcoming film Rio. One day Brian hopes to write and direct his own animated film.
Posted by Brownstones To Red Dirt Postcard Art Benefit at 5:30 AM