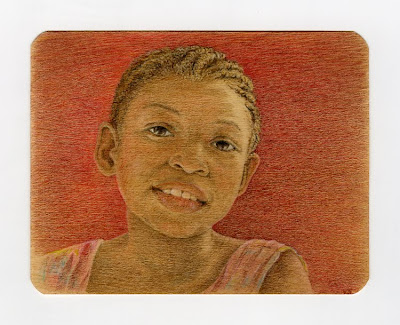 This subtly drawn portrait of the lovely Augusta, one of the children from the Brownstones To Red Dirt documentary who unknowingly has inspired so very many, is by an artist not often known for her 2-dimensional work, sculptor Vicki Saulls. Born in Idaho and raised in Georgia and California, Vicki began sculpting at an early age. Graduating with a degree in Art from University of California at Santa Cruz she left off any artistic pursuits for a number of years till an extended adventure on the high seas helped her formulate her artistic direction. Returning to San Francisco, where she resided the 20 years following, Vicki embarked on a career as a museum modelmaker and sculptor for natural history museums, aquariums and parks, and where her mostly anonymous work can still be viewed today at such venues as Monterey Bay Aquarium, Yosemite National Park, Papalote Museo del Nino and the National Museum of Natural History in Taichung, Taiwan. From this she easily transitioned to freelance sculpting for similar institutions, as well as awarded commissions as a public artist with many sculptures permanently installed in such locations across San Francisco as Union Square and Golden Gate Park. Besides helping to organize this postcard art benefit, Vicki now works as a Senior Sculptor for Blue Sky Studios sculpting character maquettes for their many development projects & feature films.

To see a glimpse of Vicki's public art please visit her website.
Posted by Brownstones To Red Dirt Postcard Art Benefit at 7:30 PM