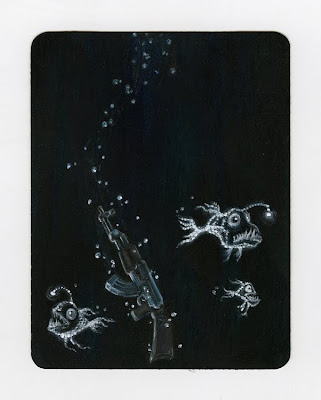 Inspired by the children's stories in the Brownstones To Red Dirt documentary, this beautifully transportive and profound painting titled Peace is by artist Marty Fuller. Hatched and raised in Toledo, Ohio, Marty graduated from Ohio State with a film degree in 1983. Following college Marty co-founded Character Builders, helping it grow from a small commercial house to an award-winning go-to facility for studio feature animation and shorts and then ventured on to Sony Pictures, Blue Sky Studios, Illumination Entertainment, and other creative places. His life as an animator, sequence director, writer and story artist has enabled Marty to play a part in the making of 20+ features, working happily with Daffy Duck and Bugs Bunny, numerous Disney heroes and sidekicks, Horton, Sid the Sloth, Scrat and many of the nutty geniuses who populate the animation industry. Recently Marty helped make the feature length documentary The Cartoonist, about the life and work of Bone creator Jeff Smith. Currently a story artist on the future animated film The Lorax, Marty and his wife Debby are also hoping to see some of their books for young readers in print someday.
Posted by Brownstones To Red Dirt Postcard Art Benefit at 2:36 PM