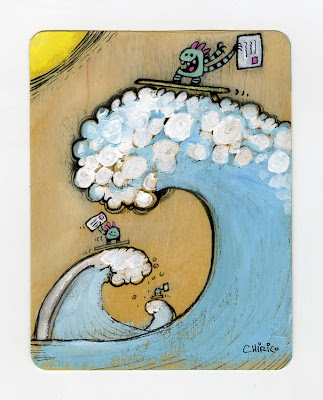 This colorful, exuberant painting is from artist Jerod Chirico. Raised in the small town of Conesus, New York, Jerod, along his three brothers, grew up playing lots of soccer, running around in the woods, and drawing while watching his father draw, who supported his family as a freelance artist and designer. Attending Edinboro University of Pennsylvania, where he learned traditional animation from Professor Michael Genz, Jerod put himself through school working as a caricature artist in amusement parks for Kaman's Art Shoppes. Upon graduating in 2002, Jerod landed his first industry job as an as an Animator at DNA Productions in Dallas, Texas working on the television series Jimmy Neutron: Boy Genius. Moving back to New York to work for Blue Sky Studios as an Animator on Robots, Ice Age 2 and Horton Hears A Who!, Jerod then transferred to the Story Department to work as a Storyboard Artist on Ice Age 3. Recently storyboarding for the upcoming feature animation Rio, Jerod is currently working on a film in development.
Posted by Brownstones To Red Dirt Postcard Art Benefit at 11:21 PM