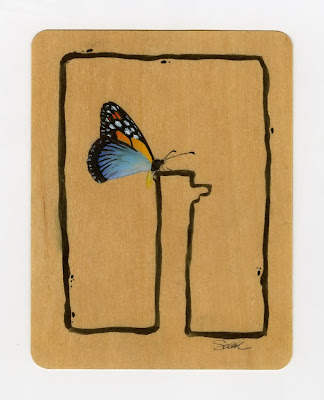 This lovely painting titled Serendipity is by the talented Sabrina de los Rios. Half Peruvian and half Italian, Sabrina was born in Miami and raised in Vancouver, Canada. Sabrina's passion for film led her to Vancouver Film School where she discovered the world of animation. While working there she was able to study various film courses most of which were in Acting and also led to part-time work as an actor. After spending 11 years at VFS as Registrar for Animation programs and then Program Manager for 3D Animation, she fled to New York for an opportunity to work as a Recruiter for Blue Sky Studios. Brown Stones to Red Dirt inspired Sabrina to return to her creative side and sparked a desire to do more. “It's important to always try to do something that takes you out of your comfort zone. By doing so, you will grow and be free.”
Posted by Brownstones To Red Dirt Postcard Art Benefit at 7:41 PM