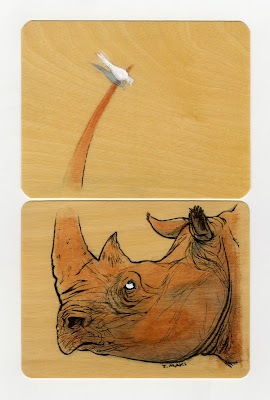 Inspired by the plight of rhinos that are hunted for their horns, artist Tony Maki contributes this beautiful diptych titled Dove’s Perch. Born and raised in the San Francisco Bay Area, Tony attended the Academy of Art University graduating with a BA in Illustration and Traditional Animation in 2001. Through college Tony supported himself as a UPS driver, after which he worked briefly as a designer/animator of hand held games. Then with the support of mentors he developed a few TV shows and worked on a variety of short films. Relocating to the East Coast, for the past six years Tony has been a Story Artist with Blue Sky Studios, where his film credits include Robots, Ice Age 2 and 3, Horton Hears a Who!, and where he is currently at work on the soon to be released Rio. A contributor to the Totoro Forest Project, Tony is also a freelance illustrator and animator who specializes in character based development and creation.

To see more of Tony's art please visit his blog.
Posted by Brownstones To Red Dirt Postcard Art Benefit at 11:30 AM