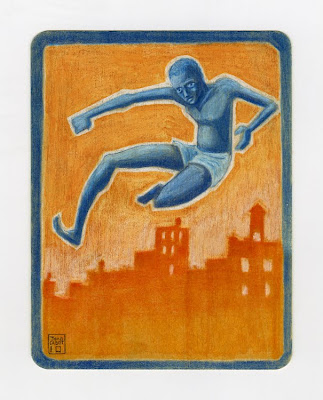 Inspired by the Brownstones To Red Dirt documentary’s Emanuel, an aspiring electrician who brings light where there was only darkness, artist Joan Cabot submits this postcard titled Beyond Their Circumstances. Joan was born on the island of Mallorca, Spain and studied art and illustration at the Escola Superior de Disseny de les Illes Balears. He then enrolled in a course at the computer graphics lab at the Universitat de les Illes Balears where he spent many years first as a student and later as an instructor in the postgraduate program. After working for small studios in Spain, he moved to London and freelanced for animated TV shows, commercials and film preproduction. Then he packed his bags and headed for New York where he joined Blue Sky Studios as Lighter and Previsualization Artist on Horton Hears a Who!, Ice Age 3, Rio and a film currently in production. Joan has co-created 5 animated short films that have been selected in film festivals worldwide, and currently has his work included in a Universitat de les Illes Balears CG Retrospective that has just finished it’s run at the Museum of Modern Art in Mallorca and will open as ANIMAR-TE: 20 years of Computer Animation at the University of the Balearic Islands in Spring 2010 at the American University Museum's Katzen Arts Center in Washington D.C.

For more of Joan's artwork please visit his blog.
Posted by Brownstones To Red Dirt Postcard Art Benefit at 2:32 PM