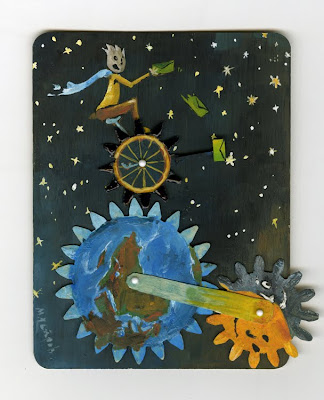 Combining a love for painting and a keeness for all thing technical artist Marin Petrov, along with his wife, learned a bit about gear mechanics in order to create this delightful interactive postcard titled The Messenger. Marin was born and raised in a small peaceful mountain town in Bulgaria, then moved to Sofia to attend university as a law student. In his last year at the Academy of Ministry of the Interior he could deny his penchant for the arts no longer and dropped out to pursue a career in computer animation. He found work with Worldwide-FX as a Character Animator and Rigger, and his film credits include the latest Rambo, The Gene Generation, Lonely Hearts, Undisputed, The Expendables and Righteous Kill. Quite recently Marin joined the Blue Sky Studios team as a Character TD and is working on a film currently in production.

To see Marin's postcard in action, check out his YouTube video!