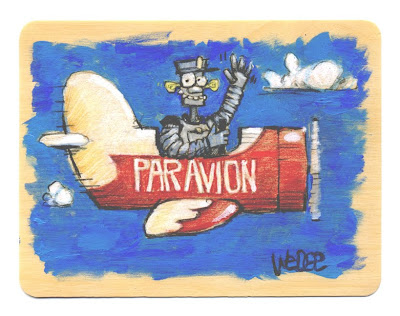 This wonderfully whimsical illustration comes to us from artist and multi-award winning Director Chris Wedge. New York born and raised, with a BFA in Film from SUNY Purchase and an MA in Computer Graphics and Art Eduction from Ohio State University, Chris Wedge IS Blue Sky Studios. Whether as a director or an executive producer, his fingerprints are on every project the studio has ever done - as they should be, Chris was one of Blue Sky's original co-founders in 1987. As Vice President of Creative Development, the studio soon became known as one of the top computer animation studios in the world, a few of their early visual effects contributions include first their work in Joe's Apartment, then Alien: Resurrection, as well as A Simple Wish and Star Trek: Insurrection. Blue Sky's breakthrough came when Chris wrote and directed the multi-award winning BUNNY for which he won an Academy Award for Best Animated Short Film in 1998. He followed up the impressive short with his first animated feature film, both Oscar and Annie nominated and a huge box office hit, Ice Age in 2002. As director of the visually stunning, Annie nominated film Robots and executive producer of all of Blue Sky's subsequent films, Chris has also been the voice of Scrat throughout the entire Ice Age film series, performing all the hilarious character's "squeaks and squeals." Currently Chris is directing Blue Sky's future animated feature LEAFMEN, a property he is developing with William Joyce based on Joyce's illustrated book, The Leaf Men and the Brave Good Bugs.
Posted by Brownstones To Red Dirt Postcard Art Benefit at 8:57 AM