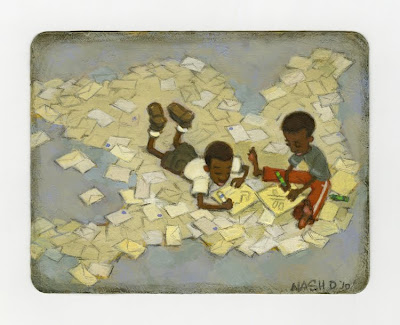 This beautifully inspired painting comes from the talented illustrator Nash Dunnigan, who was especially moved by the friendship between the two young artists, Malik and Balla, and created this piece to show the significance of their bond. The pen-pals' ability to peer over their global fences and empathize with each other could serve as models for a global community preoccupied with war and distrust. Raised in the rural (and often colonial) countrysides of Virginia, Nash graduated from Virginia Commonwealth University in 1991 with a BFA, after studying illustration and film making. He arrived in Manhattan in 1993 and worked in the New York TV animation circuit for years as a designer, storyboard artist, and art director until 2003 when he came to Blue Sky Studios. Since at Blue Sky, Nash has designed and workbooked for Robots, Ice Ages 2 and 3, No Time for Nuts, Horton Hears a Who!, and the upcoming movie Rio. Nash art directed the short, Surviving Sid, and is excited to currently art direct a feature in production that will be released in 2112. He has been part of many art collectives, including both sequential anthologies Out of Picture 1 and 2, the Totoro Forest Project, and was included in the Society of Illustrators Sequential Annual 49. Nash has also contributed to the much anticipated Sketchtravel art book, and has had his work exhibited in both Paris and New York.

For more of Nash's art please visit his blog.
Posted by Brownstones To Red Dirt Postcard Art Benefit at 4:12 PM