Cindy Nofziger of Schools for Salone, Copper Pot Pictures' partner in the effort to build a school for the kids in Sierra Leone, recently returned from her annual trip to survey the non-profit organization's many projects. While in the country, Cindy had a chance to survey the proposed site for the new school and meet with some of the children who will benefit from this auction. We sent Cindy with a package of 36 blank postcards and boxes of colored pencils for the kids at the Children in Crisis Primary School... Balla completed 27 cards himself!!
Below are just a few.. 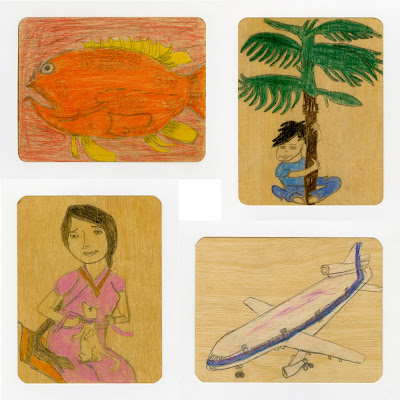 These spirited and imaginative illustrations come from Sierra Leonean student Balla Musa Tarawalie who appears in the documentary BROWNSTONES TO RED DIRT. The 15 year old student's love of his country is captured in his vibrant images of his neighborhood. Balla wishes nothing more than to be a professional artist and his inclusion in this auction is a huge step in that direction! As a baby, Balla's parents were murdered by rebels during Sierra Leone's civil war. Adopted by Ma Musu Tarawalie, headmistress of the Children in Crisis Primary School, "Aunty Musu" encourages Balla to draw and has instilled a love of peace in his heart. Though his pain rips him apart and makes him yearn for revenge, Balla uses his art as a way to reconcile the hurt from his past with his desire for a brighter future.
Posted by Brownstones To Red Dirt Postcard Art Benefit at 8:19 PM