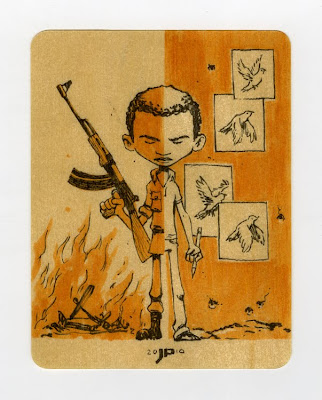 This emotional piece was created by illustrator, character designer, concept artist and graphic novelist Jake Parker. Jake grew up in Arizona reading comic books, Sunday funnies, and the backs of cereal boxes. Now all grown up, Jake is part of the Blue Sky Studios design crew where he has been adding his illustrative talent to movies such as Horton Hears A Who!, Ice Age 3, and many future development projects. On the side Jake has an impressive collection of published work to add to his resume. His creative work can be found in publications such as Nick Magazine, Flight 1 and 2, Flight Explorer, Out Of Picture 2 and his recently released graphic novel Missile Mouse: The Star Crusher. Jake's illustrated story The Antler Boy was included in the prestigious Society of Illustrators 51st Annual, he exhibits his work nationally as well as internationally and contributes his art to many benefits such as ours. Currently Jake is working on his second Missile Mouse graphic novel.

To see more of Jake's art and stay current on his Missile Mouse updates please visit his website and Missile Mouse Site.
Posted by Brownstones To Red Dirt Postcard Art Benefit at 8:47 PM