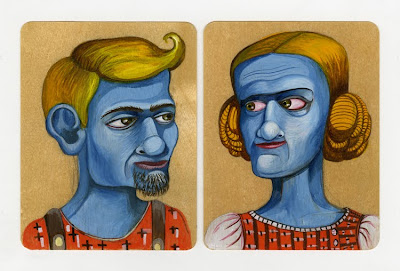 With this intriguing diptych titled Twins we enter an imaginary world called Mushroomville created by the talented Leigh Barbier. Graduating from San Francisco State University with a BFA in Art, Leigh's professional life started as a modelmaker for natural history museums contributing to the exhibits at the California Academy of Sciences, Oakland Museum and Tilden Nature Center. Moving into the film industry, she began as a moldmaker on James and the Giant Peach, which led to opportunities as a model maker and sculptor at Industrial Light and Magic and Tippet Studios. Encouraged to try her hand at digital work, she transitioned her career to digital painting at ILM where some of her film credits include Avatar, Star Wars: Episode II and Episode III, Pirates of the Caribbean, Iron Man, Star Trek and Transformers. Leigh is credited for illustrating artwork for much of The Residents discography and she actively exhibits her drawings, paintings and sculpture in galleries and shows throughout the United States. In Leigh’s Mushroomville only women and girls reside, while men live in Sugarhill. Segregation is especially difficult for the Twins, so they try to do their chores close to the border of these two territories where they can visit and discuss their observations.

For more of Leigh’s art please check out her website.
Posted by Brownstones To Red Dirt Postcard Art Benefit at 10:49 AM