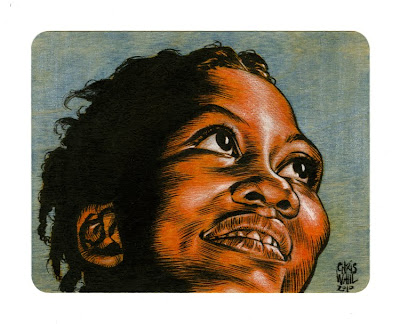 This beautiful portrait is a contribution by award winning illustrator and commercial artist Chris Wahl. A self-taught artist born in Australia, Chris grew up with a passion for drawing and caricature where soon after high school he began working at Walt Disney Television Animation. During his time there Chris published his own comicbook PLATINUM under his own insignia, X-Press Comics which went on to win awards including the prestigious Stanley Award in 1994. As a freelance artist living in Sydney, Chris' many clients over the years include Lucasfilm, Pepsi and Greenpeace as well as MAD Magazine where he has contributed loads of interior work and many, many, many covers. Chris' drawing is a portrait inspired by a photo of Gladis, as she discussed her love for dancing, taken by Brownstones to Red Dirt associate producer Clay Frost. (Though Gladis wishes to be an accountant when she grows up, the kids in Salone know her as phenomenal dancer, one they all turn to for an impromptu lesson.) A generous teacher with his illustration tips combining both traditional and digital mediums, Chris always enjoys exploring different styles in his illustration work.

Check out more of Chris’s art and illustration styles on his artblog.
Posted by Brownstones To Red Dirt Postcard Art Benefit at 9:28 PM