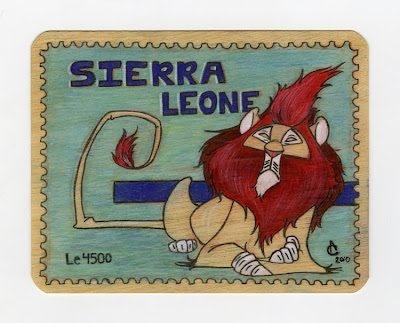 This postage stamp inspired illustration titled Leon is by artist Andrew Coats. Born in Peru to a Colombian mother and a Scottish father, Andrew was raised all over the world.  He has lived in Portugal, Venezuela, London, and came to the United States at the age of 16.  Having a love for film and art since a young boy, but unsure of how he was going to apply that to a job, Andrew opted for a liberal arts education at New York University. Once there he very quickly learned about the animation department of Tisch Film and Television at NYU, where he could combine his love for both. Upon graduating, Andrew started out as a Designer, Modeler, Rigger and Animator on the Disney TV show Little Einsteins, followed by work at Blue Sky Studios as an animator on Horton Hears A Who!, and Ice Age: Dawn of the Dinosaurs. Currently at work on Blue Sky's next film Rio, Andrew is an Animation Character Lead on the main character Blu.

For more of Andrew's artwork please visit his blog.
Posted by Brownstones To Red Dirt Postcard Art Benefit at 10:36 AM