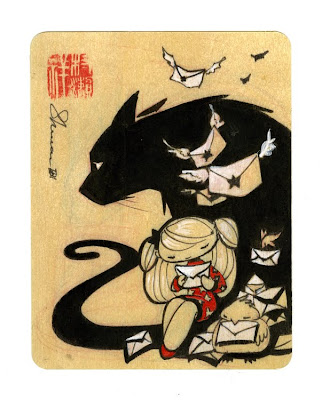 Titled Hope this lovely graphic piece is by Japanese-Korean artist Sho Murase.  Sho grew up in Spain, studied graphic design, fine art, cinematography and psychology, then received a 2D Animation Degree from the Vancouver Film School. Working in the animation and advertising industries in both Europe and the United States, Sho's clients include Nike, Virgin, Mattel and Evian, as well as Sony, Electronics Arts and Virgin; and her animation work has been nominated in animation film festivals such as Annecy, Zagreb, Mendrisio and Chicago International Animation Festival.  Sho's first color graphic novel SEI was published by Image Comics in 2003, since then she has created ME2 and illustrated over a dozen graphic novels including the adaptation series of Nancy Drew, currently in volume 20.  She has exhibited in galleries around the world, including the German Film Museum in Frankfurt and the Louisiana Modern Art Museum in Denmark, and will soon be exhibiting in a two person show at the Bluxome Street Gallery in San Francisco, California in April 2010.  Sho claims to be “the ultimate couch potato who sits around all day and night, takes long naps, watches reality TV, and does not work at all. Like NEVER.”

To see more of Sho's art please visit her website and blog.
Posted by Brownstones To Red Dirt Postcard Art Benefit at 10:43 AM