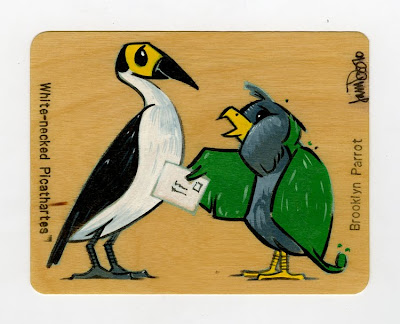 The pen pal theme inspired quite a few artists to think of birds found in the geographical regions of the film and San Francisco bay area native Jason Dryg's submission is another colorful graphic example. As an illustrator and founding member of the Local 303, a group of San Francisco based artists, Jason works in a variety of mediums which include digital, pen and ink, and the occasional traditional painting. Most of his favorite things are funny and he tries to convey this in his imagery which often mimics commercial art from the latter half of the last century.

To see more of Jason's art please visit his website and blog.
Posted by Brownstones To Red Dirt Postcard Art Benefit at 9:03 PM