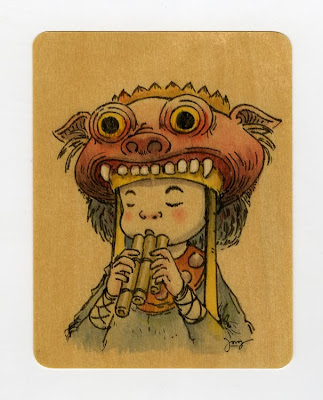 This sweet illustration is by artist Jony Chandra. The first in his family to leave his native Indonesia, Jony moved to the United States to pursue an art career.  Beginning in computer animation he realized quickly that computers where not for him, so leaving the digital world he earned his degree in fine art from the Academy of Art University in San Francisco, California. He got started at the Mural Arts Studio where he completed high end murals and mosaics which can be seen all over the United States.  Moving back into art and work in the digital realm, Jony's honors include the Best Drama Award for his contribution to the short story Fowl Play from alt.SHO.com at their First Annual Alternative Media Festival and was a matte painter on the 2008, three Primetime Emmy nominated documentary Life After People. Jony was invited to join the Blue Sky Studios crew as a Story Artist in 2006 for Horton Hears A Who! where he has worked on Ice Age 2 & 3, the short film Surviving Sid and most recently Rio.  An active participant of SketchCrawl, Jony can often be seen on the subway to work or home, sketchbook in hand, drawing away.

To see more of Jony's illustrations please visit his blog.
Posted by Brownstones To Red Dirt Postcard Art Benefit at 6:28 AM